Cat In The Box – Review

Since the protagonist of Cat In The Box, instead, was able to leave her house (even if the game was released this year…) she decided, to be popular on her… Youtube? Dailymotion? Nicovideo channel? To explore the house that days before belonged to a cult.

Want to know more about the plot? PaoGun has already talked about the storytelling of this game in the second article of Tin Coffee Pot Time: “Storytelling – Three alternative ways to tell a story”!

I, Ele, will mainly take care of speaking of the game mechanics and gameplay in general of this title, for which we decided to dedicate this specific article.

In general Cat In The Box is really enjoyable to play , the exploration phases are never boring and, luckily, we constantly find the tapes for our camera, so that the player does not rage-quit just to save the game and doesn’t waste precious game hours, as well as chocolate to keep the player from falling asleep on the keyboard due to the initial speed of the protagonist.

As you may have already noticed from the title and what PaoGun said, Cat In The Box is a much more “Western” Horror RPG than many that we are all used to seeing, although the girl protagonist is drawn in a more or less anime style.

But let’s go into detail, let’s start from the exploration. Why did I write that it is a product that looks very Western compared to others of its kind?

Because, in my opinion, the Cat In The Box gameplay hangs on the survival front , a typical sub-genre of the horror game that is typically produced by us in the West, compared to the typical Japanese Horror RPG we have all been used to. 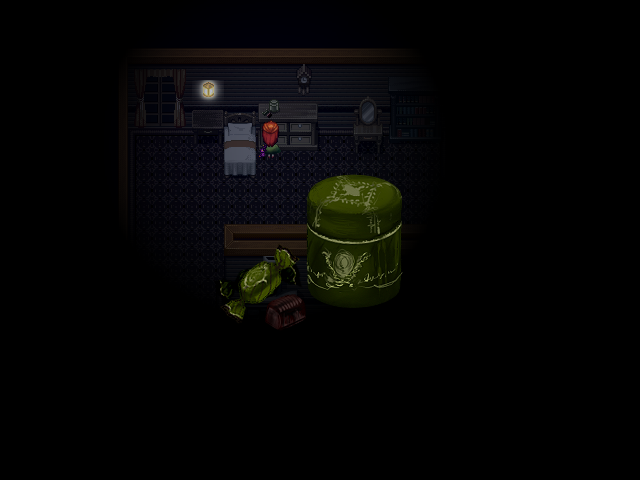 Yes, guys, I know very well that Faust Alptraum has chocolate to make you run, I was explaining- 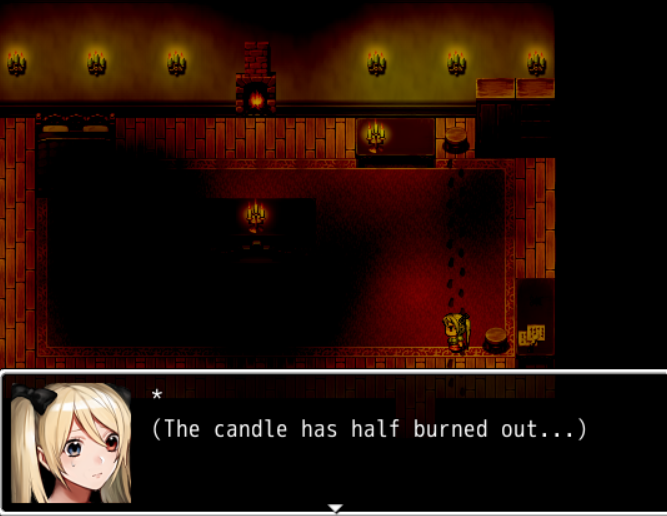 Yes, I also know CaNDLE and its anxiety-inducing candle system!

My God, let me explain…

We will compare these two titles with Cat In The Box.

The first two, or due to a bad arrangement of objects (in CaNDLE you cannot finish the game if you don’t take the first three candles that are at the beginning) or simply for the mechanic in general, create a constant anxiety in the player who will have to constantly check the level of Ca’s candle or Elisabeth’s energy.

Now, I won’t talk about how this system could have been better in detail, but I just say that in both games the anxiety of having a real game over at any moment due to the limited objects… Makes both titles simply more anxiety-inducing and with players more inclined to ragequit, if I allow myself to exaggerate. This is because they always put the situation “on a razor’s edge” , especially CaNDLE (I would like to point out that Faust Alptraum suffers much less from this problem than CaNDLE, having a discrete positioning of the indispensable objects).

Then what did Cat In The Box do?

It has simply mastered this system, giving as limited objects the speed and the possibility of saving . It was a smart choice, honestly, because you don’t find yourself in the perennial rhythm in which you risk having a game over every second and you have to constantly check the levels of something, without enjoying anything of the title, which also has a nice atmosphere.

But the effect of anxiety is still eligible , since something as vital as saving is limited. So the player isn’t overwhelmed by the mechanics, but finds a real challenge… As it should be.
If you do not use tapes well, you are forced to continue playing until you find another one of them (which is never too late, since the game has a good arrangement of objects). The experience does not come from the warnings that subsequently give you a game over suddenly, but from the consequences if you do not manage in the right way the situation you are in.

And this, for me, it makes this game more “survival” than the other two titles I mentioned . Survival is perpetually based on managing your current situation, having inconvenient consequences, but don’t give you a game over instantly…

…Like a chase against probably a version of yourself from another timeline can do.

Here, we have come to the second point of this paragraph of the review.

As the title said, I loved the chases in this game.
On a more technical level, the fact that the game gives us a limitated stamina adds a lot, as we won’t always be able to go full-speed, so if we don’t have any remedies for stamina (very rare, I have found only one of them during my play) we must learn to dose speed well… But since the chases (allow me absolutism, seriously. I’ve played so many unnecessarily difficult games that these things make me exaggeratedly happy.) have been done right, this element doesn’t make the game more inclined to give hysteria to people like me, but just adds challenge!

But besides a beautiful gameplay , the thing I liked the most is, I get out of my field, the concept of many of the chases, in general.

Many of tham have been helped, in terms of ideas , by the fact that the ancient deity evoked by the cult mentioned in the game is the cause of all this time loop… 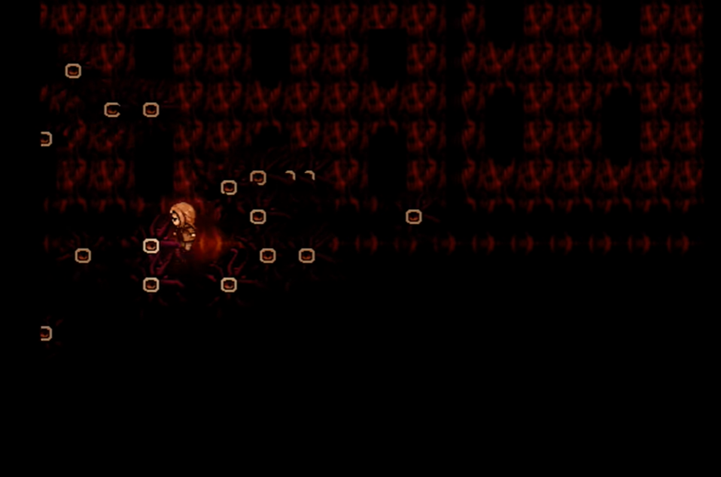 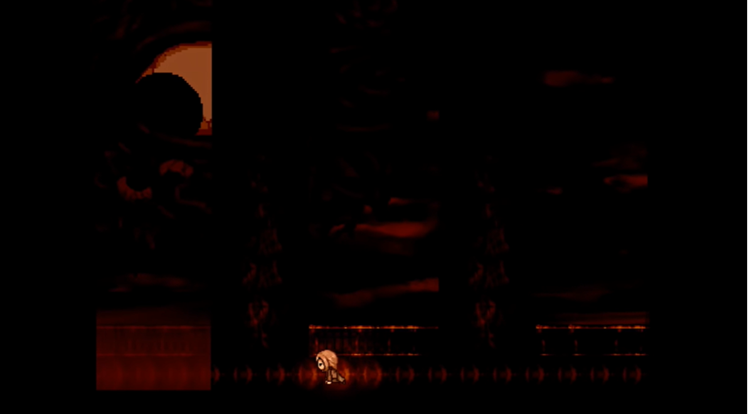 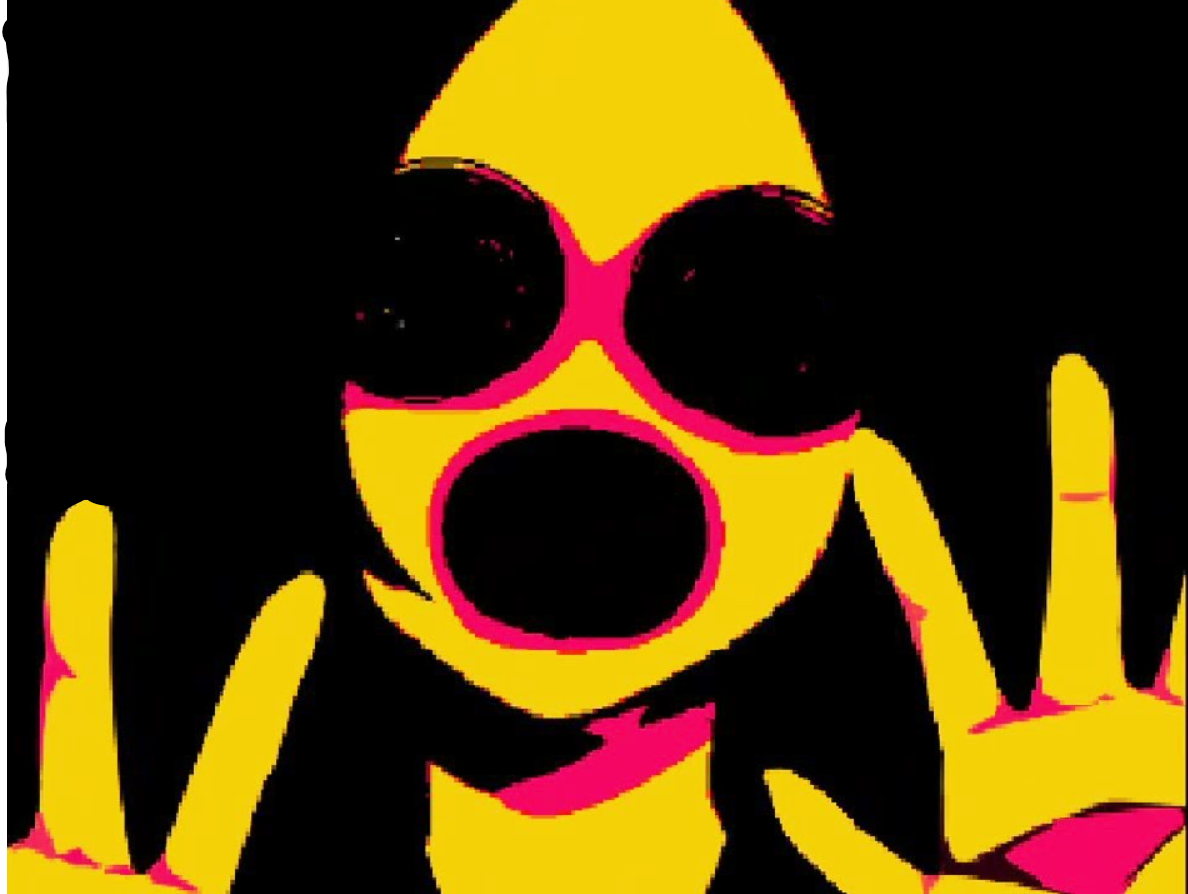 …Have become a winning element , given the almost “meta” expedient of the timelines. 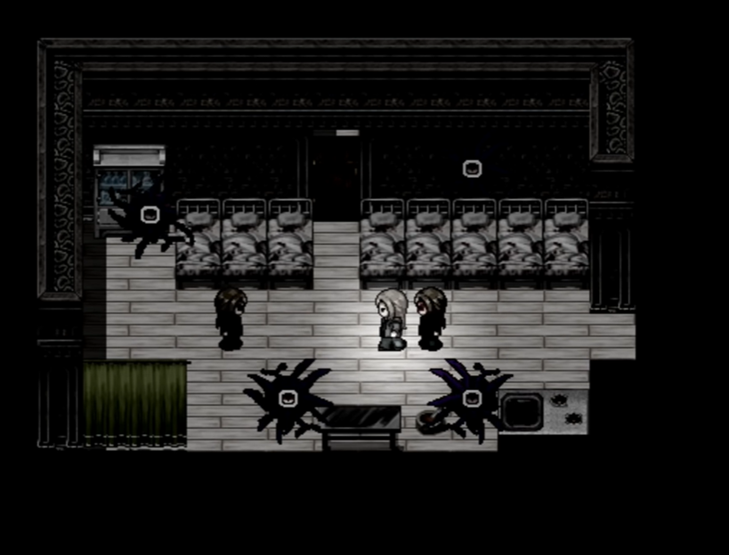 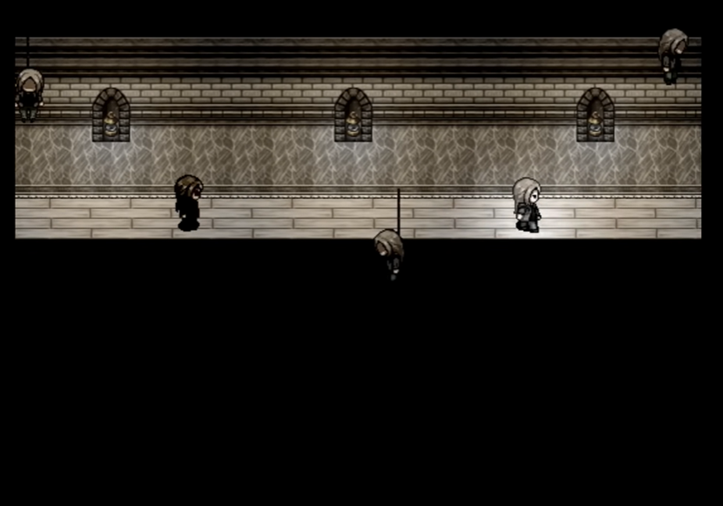 But besides beautiful, disturbing, never too invasive, never too trivial … And also foreshadowing the main plot twist, visuals in which we make the protagonist run, many other elements of Cat In The Box are based on the theme of temporal anomalies.

Indeed, returning for a few seconds on the chases, when you get caught something weird always happens at the actual game level. 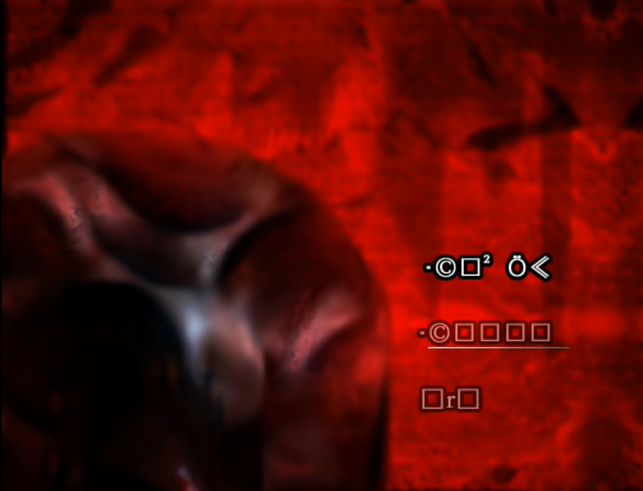 (Actually this screen change of the title happens even if you simply go to the main menu via the game menu, if you are “lucky”, but at least it happened to me when I was captured by the copy of the protagonist)

And if you click the first choice… The game doesn’t just close, or something simpler… It crashes after this scrolling text screen. 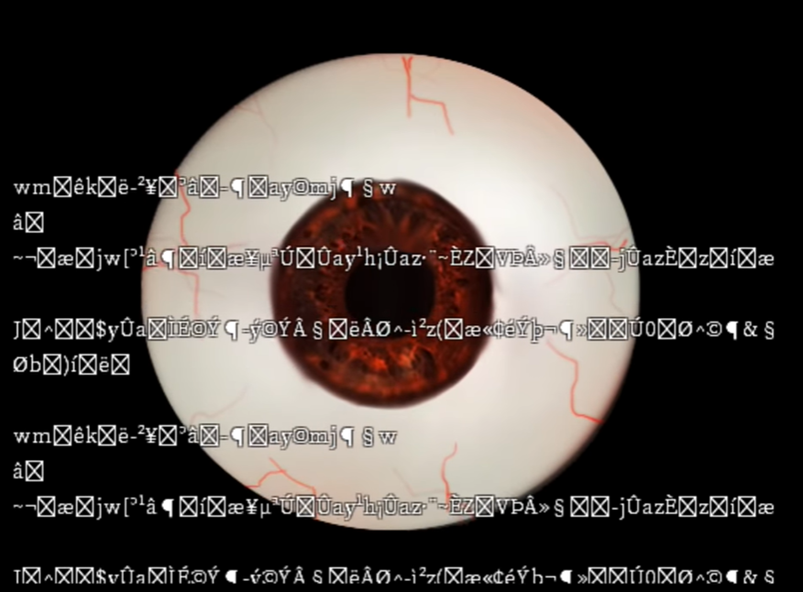 – I just got this game over, visibly excited.

From here we open the chapter that ends this very excited paragraph in this review: the easter eggs and secrets.

These are… Simply a lot! Really, there’s even a video of an entire unused minigame connecting Cat In The Box to Stygian, a game precedent to this, also from PsychoFlux Entertainment! 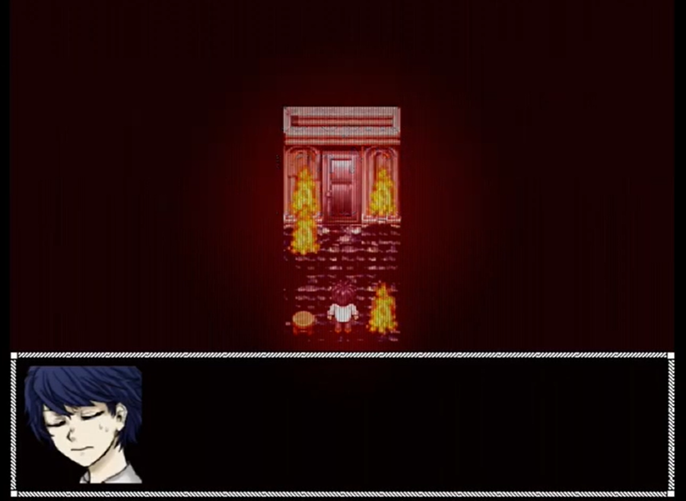 If you want to see them all, I leave you the video of what is practically the idol of every Horror RPG fan in 2020: ManlyBadassHero.

But in this article I leave you a tasting. 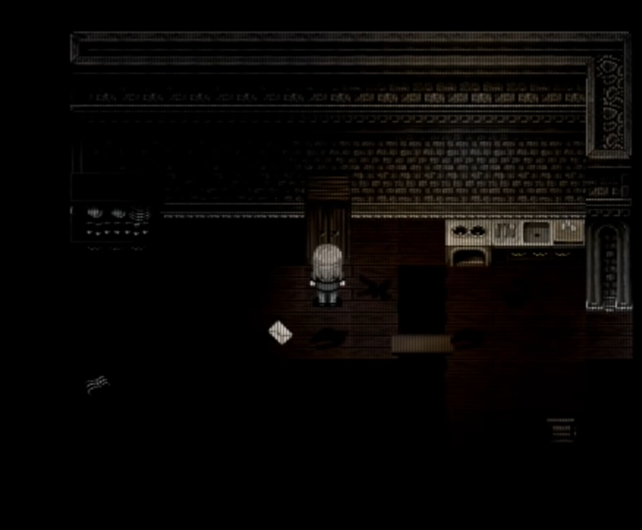 If you check this cabinet when the first killer is dead … 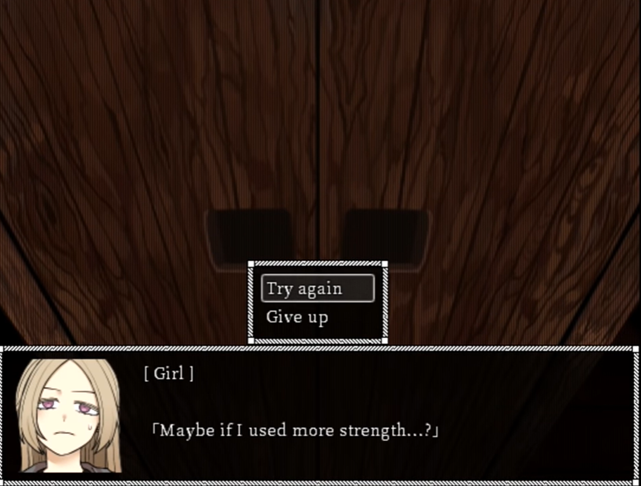 And after trying to use more force, without success … 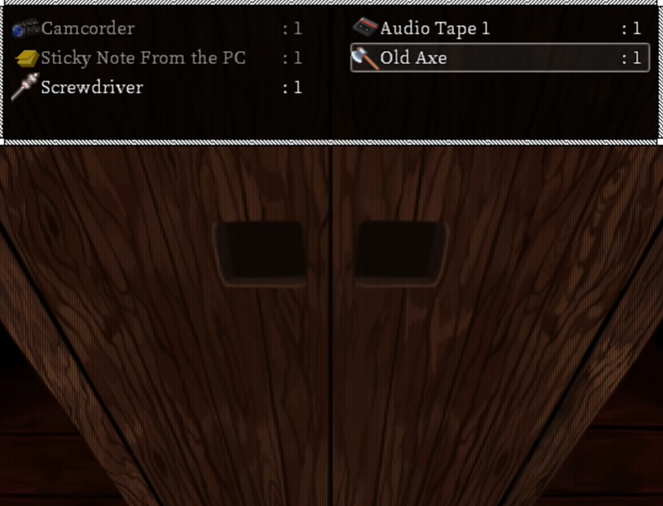 …You get the ax and then, before you go upstairs go back to this closet… 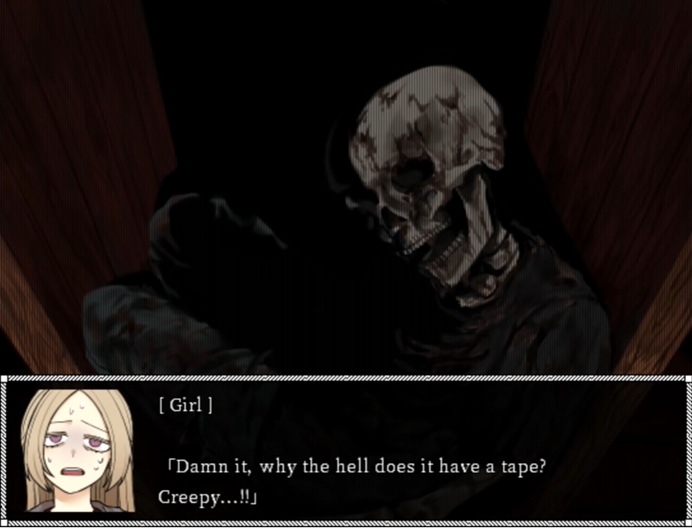 …Hmm, yeah, why it has a camrecorder and has the same clothes as us? 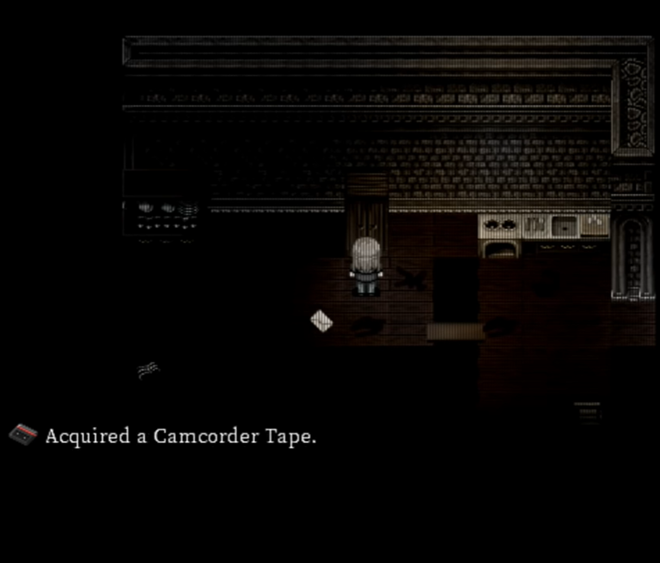 Oh, you will get a tape for the camera! Lucky you!

…Ah, this game is beautiful, I really don’t have doubts about this.

After our first two reviews full of hatred and bitterness (spoiler: there will be more hate later, just you wait ) and our appreciation for Purgatory, we found another gem in this year’s game.

With a typical slasher film start, with a plot twist that has around some elements of foreshadowing, at times even incredible, together with a well thought out and balanced gameplay, also never left to approximation because “eh, it’s Horror RPG anyway” and an almost western aesthetic, for us Cat In The Box will remain for a long time an important point of reference and comparison.

The Rebirth of Franklin Albrecht

… Do you want to know the truth? We had very little desire, after our long period of absence, t ...